Logan’s jammed web site for all the free stuff

okIt was massive. It was beautifully organized. The shift to a psychedelically informed culture is well underway. 1900-plus people, from 37 countries attended the four day event, according to Dieter Hagenbach, of  gaiamedia, organizers of the event. A big bookstore. A room dedicated to video presentations–art and documentary.http://mazerunner.wordpress.com/

Altered states of consciousness are portals to multiple worlds. Many of these worlds are populated by sentient entities: gods; demons; plant teachers and animal spirits; Terence McKenna’s machine elves. What forms of language are being used to communicate in these “Antipodes of the Mind?” Is language itself evolving in the psychedelic sphere? The Sundance Kid kept asking, “Who are those guys anyway?” The Xenolinguist wants to know what ‘they’ are trying to tell us.

Ken Wark gave a mind-blowin’ talk yesterday at UCLA!  Hopefullly, video/audio should be available from D!MA archives. A Wonderful flow of jargon, tags, andnew categories!  Someday we will have tags here on our WordPress app! Wark mentioned WordPress more than once.See a piece here from his new book due out laterfrom Sit

Sunday, April 13The Guy Debord that is best known is the one who is the author of The Society of the Spectacle, but in many ways it is not quite a representative text. Lately there has also been a revival of Debord the film maker, but here I want to think about Debord is a slightly different light. So I will discuss not so much his writing or his films, and still less his biography, but a game. Beside being a writer, a film maker, an editor, and a first rate professional of no profession, he was also, of all things, a game designer.http://totality.tv/2008/4/13/game

media maven out of NYC    Join us tomorrow at 8PM Eastern as we hold a live discussion with author, teacher, and documentarian  Douglas Rushkoff  in the #boingboing IRC channel, to talk about some of the work he’s doing to move his studies in a “‘new’ direction,” to focus less on the tech/media sphere and towards the nature of money and corporatism

Chances are you’ve heard of the ‘small world’ idea of six degrees of separation. But is it correct?

The idea traces back to an experiment begun in 1967 by Stanley Milgram, in which he tried to trace how many acquaintances it would take to pass a letter between two randomly selected people. The result that entered the public consciousness was that in general it took six steps or fewer to bridge the gap between any two people. But is that result accurate? Judith Kleinfeld, 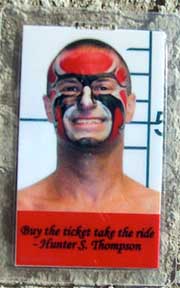