An ecocity is an ecologically healthy city. Into the deep future, the cities in which we live must enable people to thrive in harmony with nature and achieve sustainable development. People oriented, ecocity development requires the comprehensive understanding of complex interactions between environmental, economic, political and socio-cultural factors based on ecological principles. Cities, towns and villages should be designed to enhance the health and quality of life of their inhabitants and maintain the ecosystems on which they depend.http://ecocity.wordpress.com/2008/05/15/san-francisco-ecocity-declaration/

Said a friend recently, “We hear about Paolo Soleri so infrequently these days, why do you keep mentioning him as a key person in your career, anyway?”  “My career?  Should be everybody’s survival, not just one individual’s career.”

Paolo Soleri is one of the three most important people of the 20th century, and leading into the 21st century now.    xxxxX Says  Soleri, though developing the theory in a language that most people couldn’t read – or didn’t want to think about – said it most succinctly in the title of one of his books: “The Bridge Between Matter and Spirit is Matter Becoming Spirit.”  This sounds puzzling to most people but simply means that evolution delivers changes in a particular pattern in which people now play a crucial role giving rise to higher levels of integration, physically and thereby spiritually, if spirit means higher levels of consciousness and conscience in us humans and heading toward whatever may come in moving in that direction into the unknown reaches of future evolution.  http://ecocity.wordpress.com/tag/paolo-soleri/

After 40+ years San Francisco seems to be the first city on the Planet Earth/Gaia to get a clue about Soleri’s work and ideas! Bucky Fuller mentions somewhere that on average it takes 50+ years for an Innovation to really catch on….so  10 more years to go!  Stewart Brand featured Soleri way back in the Fall of 1968 in the  Whole Earth Catalog! Arthur C. Clarke in his farewell video last Dec., 2007, said that it only took 25+ years for 1/2 of Humanity to get cell phones! That’s over 3+ billion people!  A video last month showed the first cell phone being used 35+ years ago….    The Digital Be-In is pleased to be honoring urban designer  Paolo Soleri,who is appearing at the  Ecocity World Summit  in San Francisco, with a special presentation on his major contributions to the sustainable city movement.

and today at 5 PM

See one of Soleri’s earliest Arcologies, Asteromo! One of the first space colonies ever designed, circa 1969?! 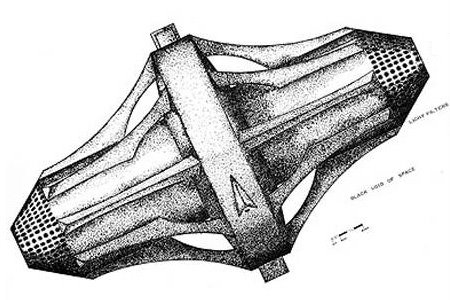